It's 3 AM and Bill's making Ratatouille

Seriously.  It's approximately 86 degrees in the apartment.  I'm being kind of stubborn about the air conditioning.  It's expensive and consumes a great deal of resources.  It wasn't that bad today, with fans going and windows open.   And we hit the city pool in the evening (thank you Robert Moses).    For dinner, I made no cook wraps: mesquite turkey, pepper jack, red and green leaf lettuce, Bill's pesto on Trader Joe's habanero lime tortillas and my favorite Polar Orange Dry soda.

It's been a bit unbearable though.  I'm feeling exhausted and utterly depleted this summer.  Natsubate is the Japanese term for "summer lethargy."  I didn't even photograph that sexy vegetable share on Thursday.  It is a gorgeous haul:  basil, beets, green beans, dandelion greens, lettuce, yellow squash, zucchini, cucumbers, spring onions, tomatoes (cherry and 1 beefsteak), peaches, chard.

Tomorrow is going to be 100 degrees or something.  In order to avoid heating up the apartment during the day when things are at their worst, I usually do any cooking early in the morning.  For example, it's the perfect time to cook up a batch of yogurt or boil pasta for a salad.  Bill is a night owl.  He likes to cook late at night, and many times I have awakened to the whirr of the food processor as he whips up a batch of pesto at an ungodly hour.

Right now the house smells heavenly.  The kitchen fans is exhausting all of the loveliness into the courtyard, where I am sure it is causing my neighbors to salivate in their sleep.

I have given up though.  I am retreating to the bedroom.  I'm going to turn on the a/c and try to get some sleep, assured that I will be enjoying some variant of ratatouille for breakfast.

Saute the vegetables, then cover and stew for a few minutes until everything is cooked to your liking.  Eat hot or cold, with pasta or rice, on toast (bruschetta), rolled in a tortilla or straight out of the fridge with a spoon.  Make a very large batch and eat it for days.
Posted by Barnacle Bertha at 3:18 AM 1 comment:

It was a hot and swampy night, with the fog rolling in from the harbor.  Her name was Pan, Patty Pan, and she wore her dark green cloak like a second skin, and her perfume filled the air with the exotic scents of India. 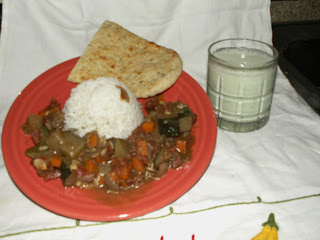 Pattypan Masala with Rice and Naan

Cook rice using a rice cooker or your preferred method.  Heat a large pot.  Add olive oil and butter.  When melted, add onion and saute until golden.  Add garlic and garam masala to and continue to cook until you smell the garlic and spices.  Add squash and carrots and stir until coated with aromatics and oil.  Add water, stirring to scrape up the bits from the pan.  Add tomatoes and brown sugar.  Cover and simmer 15 minutes.  Turn off heat and let stand to finish cooking, until ready to serve.  You may serve this at room temperature or reheat if desired.

To Serve:
Gently pack rice into a custard cup and unmold onto a plate.  Surround rice with squash and naan.

Blend everything on high speed in a blender.  Serve over ice.

The Verdict
It was delicious, spicy and had a bit of heat.  The squash is similar to eggplant texture, but a bit more firm. The garam masala spice blend was purchased at an Indian grocery, and the masala naan from Sahadis, one of the best things about living in Brooklyn. 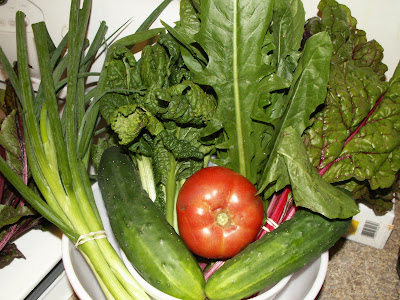 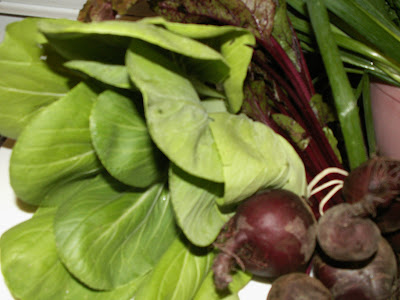 Bok Choy and Beets with greens 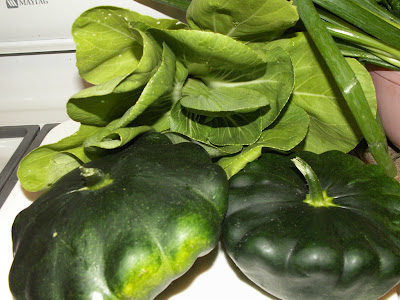 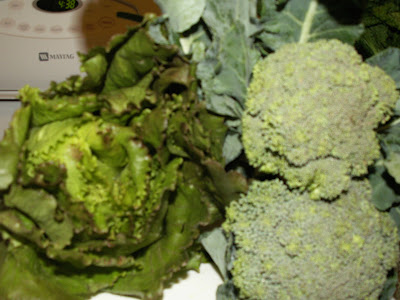 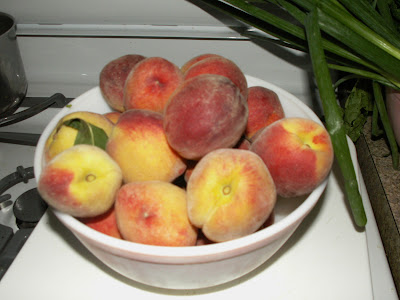 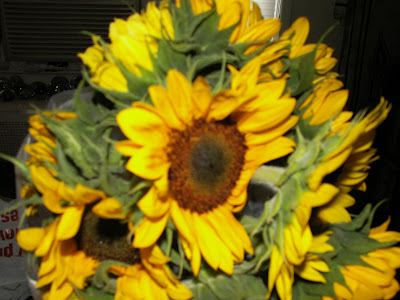 Sunflowers!
Posted by Barnacle Bertha at 11:28 AM No comments:

Happy Interdependence Day!  It was 90+ degrees and a beautiful sunny day.  My parents came to celebrate, and to enjoy some fireworks.  Unfortunately, Macy's changed the location of the big display.  We did not have a good view.  Fortunately Mother Nature provided a brilliant sunset.

I planned a simple menu with minimal cooking.   I mixed all of the vinaigrettes, syrups and sauces the night before.  Also, Bill and I made the appetizers and dessert on Friday night.  In the morning, I made the cacik, potato salad, coleslaw and put the chicken in the crockpot.


Mix together rub ingredients in a large zip top bag and add chicken. Shake the bag, and press the rub into the chicken pieces. Marinate for at least 3 and up to 24 hours in refrigerator. Place in a crockpot and cook 10 - 12 hrs on low or 6 - 8 hrs on high.  Meanwhile, combine sauce ingredients in a jar and shake to combine.

Let rest for a half hour, still covered. Shred with forks and mix with barbecue sauce. Serve as a sandwich on potato rolls with cole slaw. Can be served warm or at room temperature.

Combine vinegar through salt in a jar, and shake to combine.  Add oil, and shake.  Bring a pot of salted water to a boil, and set up a bowl of cold water.  Cook green beans until bright then remove from boiling water with a slotted spoon.  Drop into cold water until cooled, then drain.  Add potatoes to the boiling water and cook until tender.  Drain.  Combine beans potatoes in a large bowl and pour vinagrette over all.  Just before serving, garnish with blue cheese.

Make lemon syrup: combine sugar and lemon juice in a large jar and shake to dissolve sugar.  Store in the refrigerator. Before serving, combine syrup, water and ice in a pitcher.

Coffee Float
Brew a pot of your favorite coffee.  Pour into mugs, and top with a scoop of vanilla ice cream.

The Verdict:
The chicken was spicy, tasty and literally fell apart when I stirred it with a pair of tongs.  Potato rolls are essential: they absorb the sauce without falling apart.  The coleslaw was very peppery, watery and needed a bit of sugar to balance.  I think it was due to the bok choy.  Next time I will make it with regular cabbage.

The potato salad was good, and I will make it again, but not with the chicken.  It has a strong flavor that is a bit much to pair with the spicy pulled chicken.  Next time I will make my grandmother's recipe.

The lemonade was too strong, and needed twice the water.  The coffee float was a hit.
Posted by Barnacle Bertha at 12:48 PM No comments:

Last week was bloody hot.   It was between 85 and 95 degrees and humid for 5 days straight.  It's just plain wrong to use the stove or oven in this kind of heat.

I had joined Swapbot Baking Week #13, but just couldn't bring myself to turn on the oven.  The weather finally broke but the next heat wave will hit on Sunday.   So, this evening Bill and I are having a baking marathon.    I made chocolate chip cookies, and Bill made baba ganouj (recipe follows) with gorgeous eggplants he bought at his favorite produce market for 39 cents a pound.

I decide to test a small batch recipe, adapted from Chocolate Chip Cookie Dough Topped Cupcakes on the Not Eating Out Blog.  Oh yes, you must check out the post.  It's such a brilliantly evil idea to top cupcakes with cookie dough.  Someday I will make it as intended, but tonight I pressed the dough into a large disc and slid it into the oven. 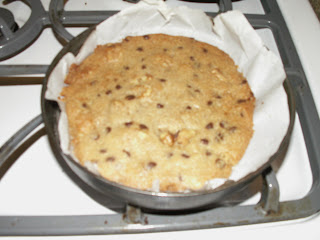 Combine sugar through vanilla in zip top bag.  Squish the bag to mix.  Add flour and salt.  Squish until it looks like cookie dough.  Add nuts and chips.  Squish to combine.  Form into one Great Big Chocolate Chip Cookie (or 6 "normal sized" cookies).  Place on a cookie sheet or small pan lined with parchment.  Bake at 350 for 15 minutes (8 minutes for "normal sized") or until golden brown.

Prep Ahead:  Combine all dry ingredients in a quart sized ziptop bag.  Label it with "add 1/4 C butter, 1 1/2 tsp water, 1/4 tsp vanilla."  Store in your cabinet until you are ready to bake a quick batch. 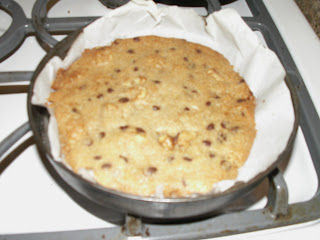 The Verdict:
The cookie rose a bit, but was crispy and chewy as a good cookie should be.  You could really taste the butter in this recipe.  It was delicious, and I will definitely make it again.  It's the perfect size for dinner for 4.  Prepping the dry ingredients ahead of time allows you to make a batch at the spur of the moment.  I decided to mix it right in the bag because Bill's baba project needed a bit more space, and we have limited countertops.  It really worked well though.  Baking it as one big cookie is less fussy.  I think I would make this for company.  Serve it family style: place the cookie in the center of the table and let everyone break off pieces.
The Dish Bitch
Measuring cup
Measuring spoon
ziptop bag (yes you can wash and reuse!)
7.5" baking pan
ABOUT A BABA
Bill loves eggplant, especially baba ganouj, a roasted eggplant dip of Mediterranean origin. He makes it in large batches. He likes to make it over a wood fire, or by burying the eggplants in the coals of a wood stove. Since we do not have access to a wood fire at the moment, he roasts the eggplants in the oven at 400 degrees.  He doesn't have a recipe, just adds things and keeps tasting until it's right.
It was late when we started, and I went to bed after taking this picture.  Unfortunately, he was too hot and tired to snap shots of the eggplants after roasting. 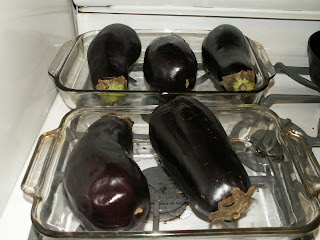 Black Beauties ready for the oven.

Prick the eggplants with a fork and place in a baking dish.  Roast the eggplants over a wood fire or in the oven at 400 degrees, until completely soft. Scoop the meat from the skin into a large bowl. Add remaining ingredients, and mash everything together with a potato masher. Serve with crackers, bread or matzoh. Yield: 4 1/2 cups.  More than enough for company and a week of no cooking. 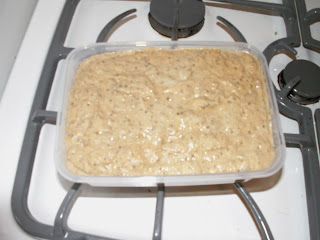 The finished product.
Posted by Barnacle Bertha at 12:00 AM No comments:

For the past week, the temperatures have been in the 90s.  Brutal.  Like the 9th circle of hell.  Cooking is not an option.

BB and I try to live without the air conditioner.  When we do turn it on, we set it at 78-80 degrees, unless it is just unbearable.  The weather finally broke Tuesday night.  What a relief.  Last night the temperature dropped to 58.  It was perfect for sleeping.  Yesterday and today were comfortable, dry with bright blues skies and cotton candy clouds.

This evening Bill and I went for a walk at sunset.  With the wind it was actually a bit cold.  It felt like a September day.  I made this soup for dinner. 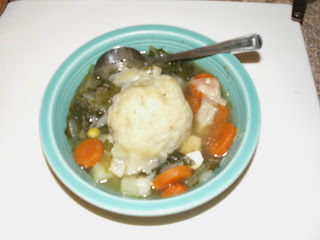 Meanwhile, place a second pot with water and salt to boil. Remove matzoh ball dough from the refrigerator.  Divide dough into 8 large portions, and roll into balls.  Drop into boiling water and simmer 15-20 minutes.

Ladle soup into a bowl, then place a matzoh ball in the center and garnish with caciocavello cheese.  Serve hot or room temp.

The Dish Bitch
2 pots
spoon
ladle
slotted spoon
cutting board and knife
Posted by Barnacle Bertha at 10:31 PM No comments:

Barnacle Bertha
United States
I currently live on the western end of Long Island, more commonly known as Brooklyn. This blog was started as a way of documenting the challenges of managing a CSA (community supported agriculture) share, cooking and the war against rot. The Name: I call myself Barnacle Bertha because I live near the sea, have a tendency toward the cynical, and cuss like a sailor. Barnacle Bill, or BB is my first mate.